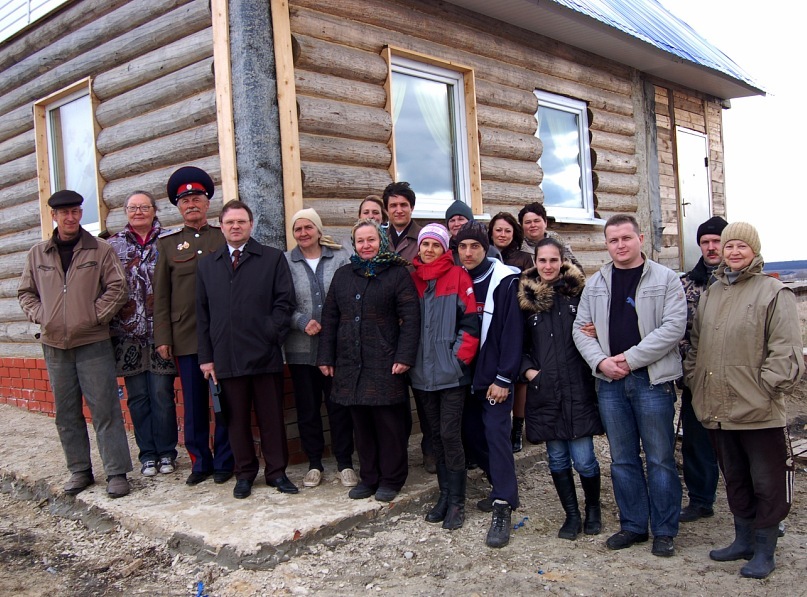 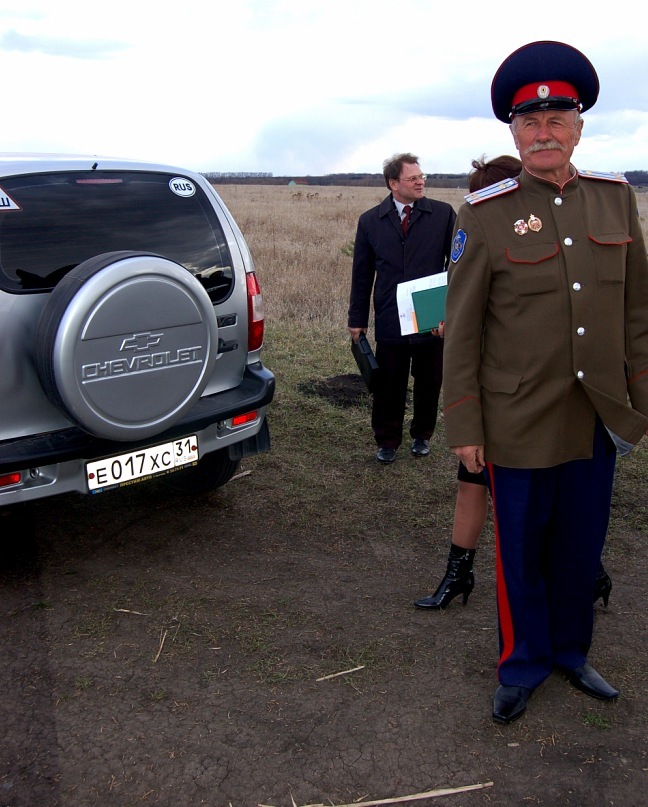 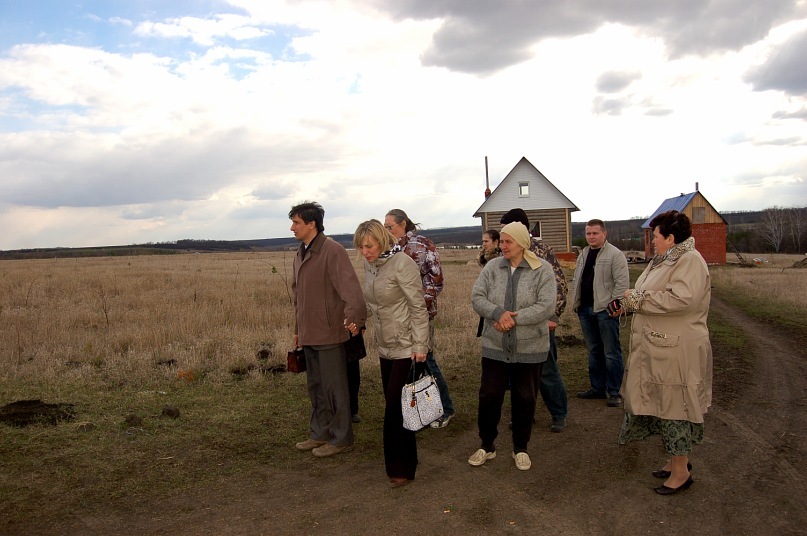 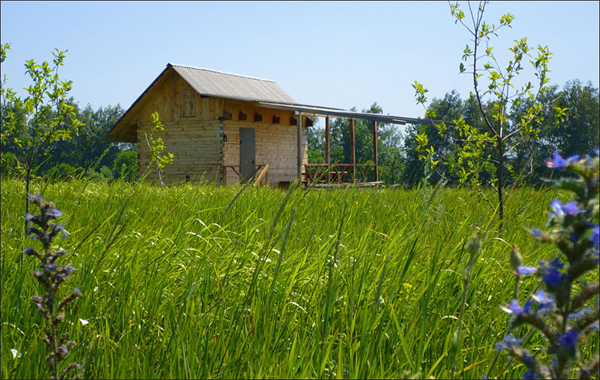 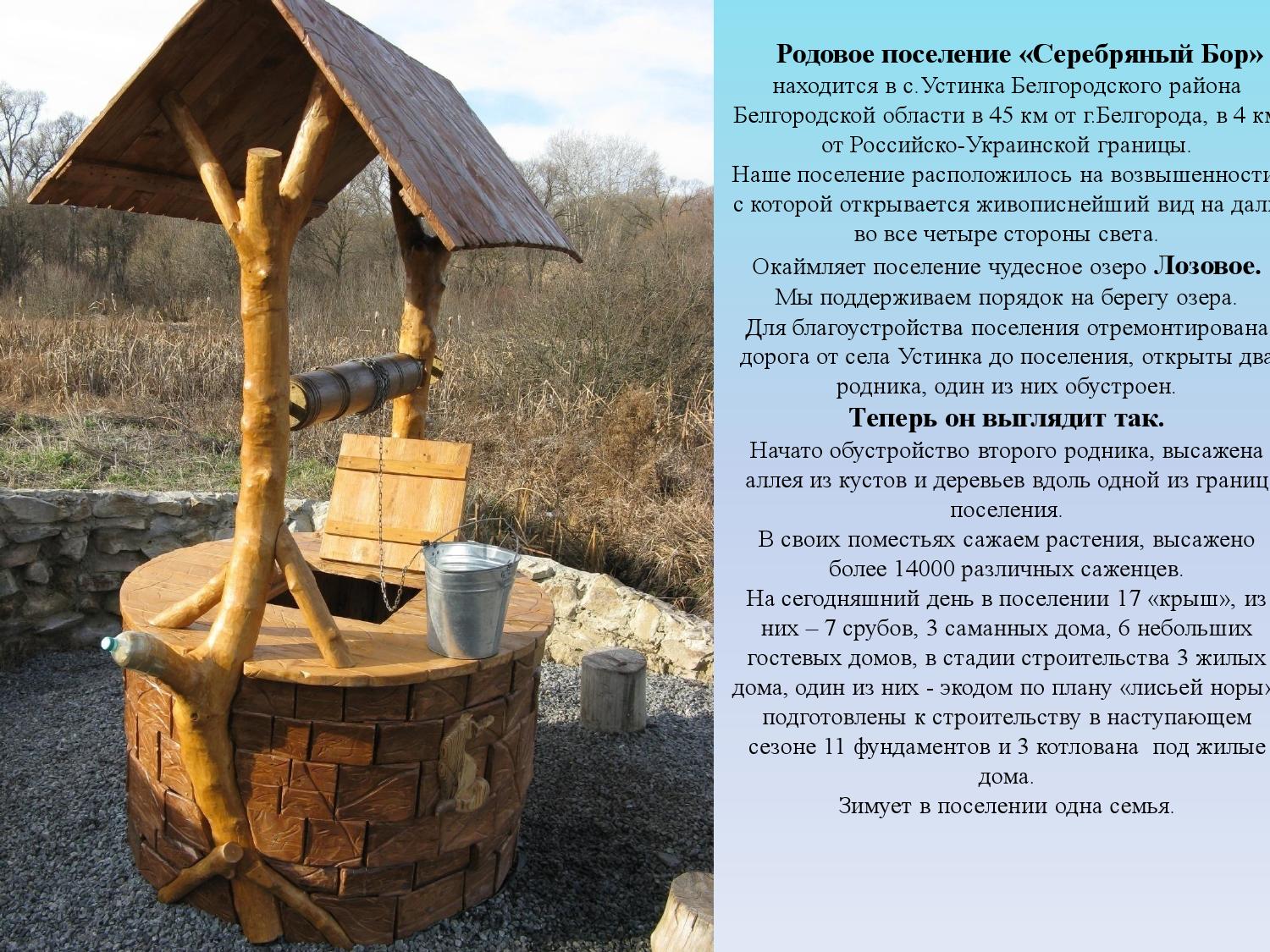 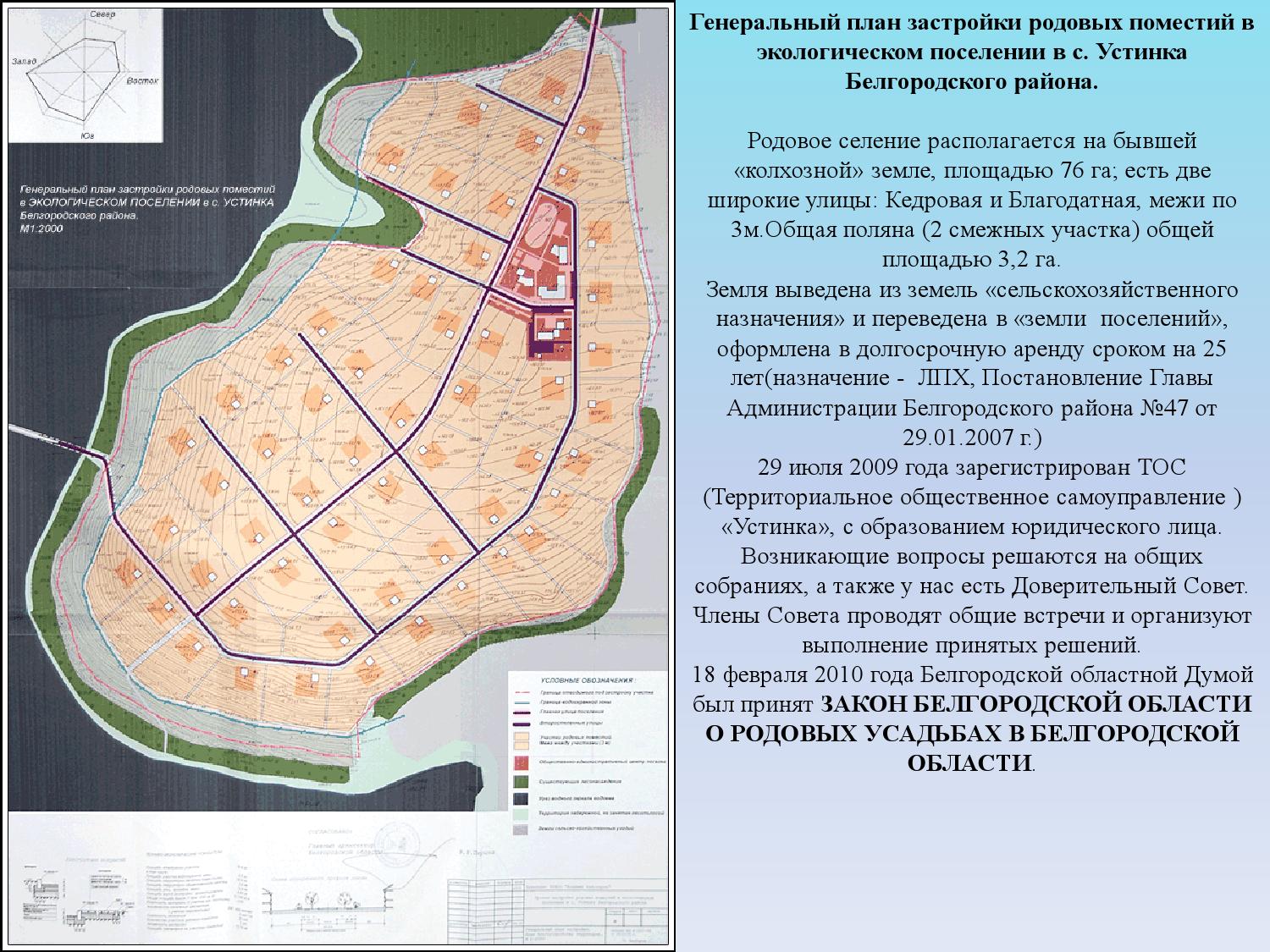 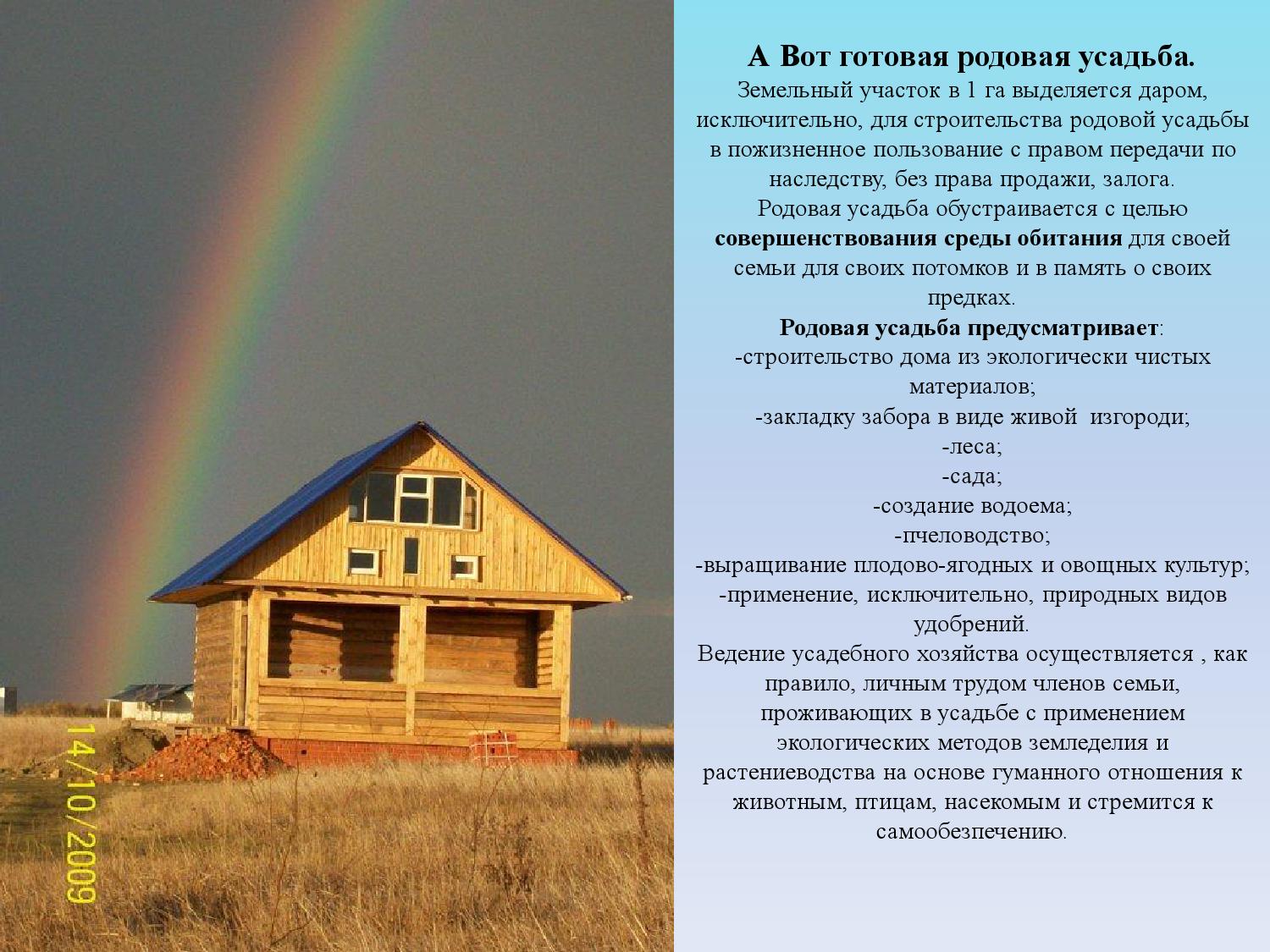 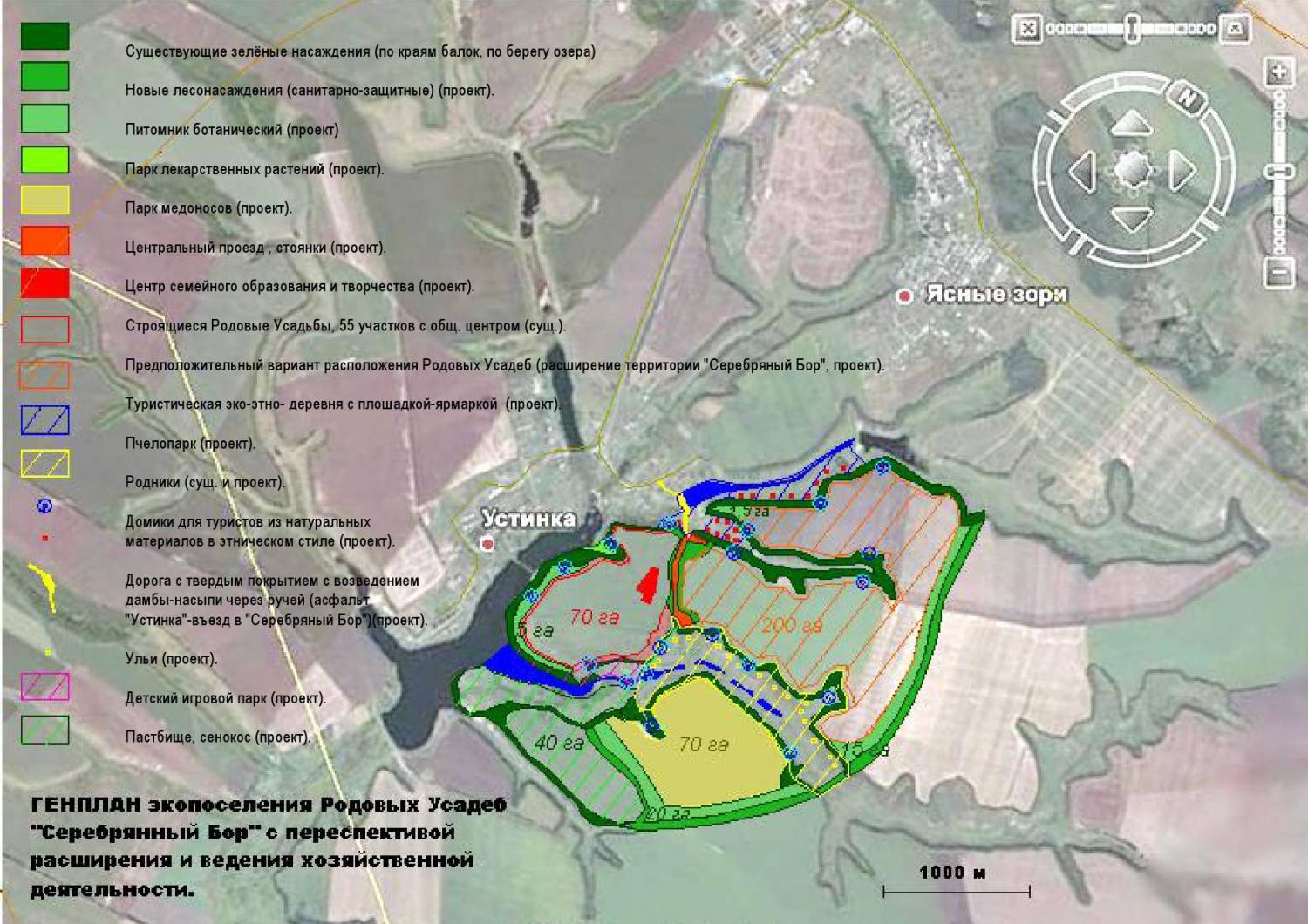 The settlement "Serebryany Bor"(lit. Silver Pinewood) is located in the village of Ustinka, 45 km from the city of Belgorod and 4 km from the Russian-Ukrainian border.

The settlement "Serebryany Bor"(lit. Silver Pinewood) is located in the village of Ustinka, 45 km from the city of Belgorod and 4 km from the Russian-Ukrainian border. Our settlement is situated on the hill, which offers scenic views in all directions. The village borders a lovely lake, “Lozovoe”.

The settlement is located on former agricultural land with an area of 76 hectares. Land is divided into 55 plots of about 1 hector each. There are 2 wide streets: Kedrovaya and Blagodatnaya. The total clearing (2 adjacent plots) has a combined area of 3.2 hectores.

Land is derived from "agricultural land" and transferred to "settlement land". The long-term lease period is 25 years (Decree of the Head of Administration of Belgorod region No. 47, 29.01.2007).

The road from the village of Ustinka to the settlement was repaired. There are 2 springs. A pathway of trees has been planted along one of the boundaries of the settlement.

All in all we have planted more than 14 thousand plants in our settlement. We are restoring the land after years of farming. We have begun to build houses.

To date, the village has 17 "roofs": 7 log cabins, 3 mudbrick houses, 6 small guest houses, and an eco-house under construction according to "foxhole" plan.. We hope to have the foundations finished by the start of the 9th season of the settlement. One family remains in the settlement over winter.

On the 29th of July, 2009 we were registered as the TPS (territorial public self-government) “Ustinka”.

We are planning to build a children’s centre, and to invite teachers from Schetinin school to teach there.

The land is gradually coming back to life; every year more and more birds and animals appear. We plant wheat-grass to strengthen the land, as it loosens and fertilizes roots. Every season the flower garden which grows by the roadside changes. The life-giving water from open springs quench the thirst of everyone passing nearby. People are waking up.

Our motto is: "improving the environment starts with yourself".