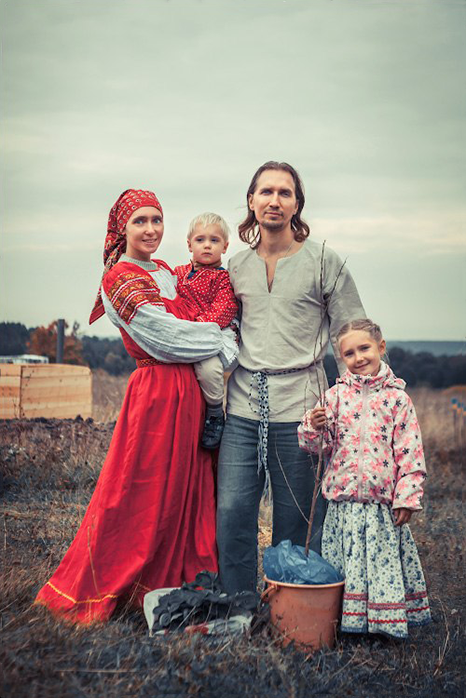 What is Kin Domains?

“Wouldn’t it be better, Vladimir, instead of lots of posts that are later going to rot, to plant trees? Between them you can plant impassable bushes. What a beautiful fence that might make. Everyone would have one a little different, and each could gaze in admiration. Your descendants would remember you as the beautiful fence’s creator through the ages. Time would not be taken from them to repair it, and it would bring benefits. It would function not only as a barrier. One fence should be made of birches growing in a row. Another from oaks. Some, in a creative surge, would make a fence of many colors, like in a fairytale.”

“One might plant different-colored trees: birches, maples, oaks, cedars. Another could intertwine mountain ash with their burning red clusters and plant guelder rose between them. Still another could make room for bird cherries and lilac. You can think all of it through from the beginning. Each person must observe what grows—how high, how it blooms in spring, how it smells, and what kinds of birds it attracts. Your fence would be singing and fragrant and would never tire your gaze, since it would subtly change its pictures by a half-tone every day. It would bloom with the flower of spring and blaze with the colors of fall.”

In order to carry out the project as quickly as possible, you can use a plow around the perimeter to dig a furrow and plant the saplings in it. Plant all the saplings and shrubbery seeds that you’ve selected between the trees at once. Then run the plow again right next to that and turn the earth. Before the earth gets trampled, correct and line up each of the saplings.”

Each person can sense intuitively what is the most acceptable for him and what will also bring joy to his children and grandchildren. There cannot be a single plan. It is as individual as the great painting of a painter-creator. Each has his own

Our plot is a wasteland

The wasteland has been surrounded by a living fence. Let us take up another three quarters or half with forest and plant different kinds of trees in it. At the forest’s edge, where the remaining land joins, we will plant living fencing out of the kinds of bushes that animals can’t get through to trample the seedlings in the garden. In the forest of living saplings planted closer to each other, we will set up an enclosure where a goat or two, for example, might live later. Also out of the trees, we will set up a shelter for laying hens.

In the garden, we will dig a shallow pond of a couple of hundred square meters.

We will plant raspberry and currant bushes among the forest trees, and wild strawberries along the edge. Also in the forest, after the trees have grown a little, we will place three empty troughs for bees. We will plant a gazebo of trees, where you and your friends or children can be together, away from the heat, and we will set up a living bedroom, and your creative studio. And a bedroom for the children, and a guest room.

Bushes between the trees—think about how to use them for your life’s delight. But here the trees do not let the grass and bushes grow between them, and you can bear this in mind for your own future living home. You must give everything a program and adjust it to your taste. To cherish and delight you and your children, everything in the vicinity that will be on your land must cherish and nourish.

A garden can also be made in such a way that it does not require too much labor from you, after all. Here it is only necessary to observe. Between the grasses—the way everything grows in the forest—you could also grow vegetables, the most beautiful tomatoes and cucumbers. You’d find their taste much more pleasant than what you normally eat, and they will bring the organism much more benefit when the land around them is not bare.

There is nothing without benefit in nature, and there are no unneeded weeds. Nor are there beetles that harm man.

How can you plow the same place every year, tormenting the land? It is like picking at an unhealed wound with a rake and at the same time demanding that grace grow from the wounds. The potato beetle or locust will not touch the plot that you and I are drawing. When everything grows in great harmony, then the fruits yielded to their grower are harmonious.

It is not worth putting too much effort in building a large house that is too solid.

When your grandchildren grow up, they will definitely understand what material of all the earthly ones conceived would be more pleasant, solid, and healthful for them. Right now, you do not have that kind of material. Your grandchildren will build a wooden house out of the trees that their grandfather planted and their father and mother loved. That house will heal them, protect them from evil spirits, and inspire them to the light. The great energy of Love will live in that house.